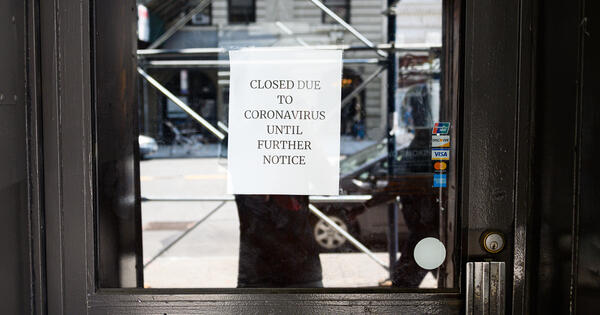 A federal program is supposed to keep midsize businesses afloat. Why does he not reach them?


Can you summarize the rationale behind the Main Street Lending Program, and how effective it has been so far?

A major concern in the COVID crisis is that the economic downturn could have long-term effects if it causes many businesses to fail. Once the virus subsides and the economy begins to recover, bankrupt companies would no longer be around to ramp up production and rehire workers. Owners and workers of failed businesses would not have jobs to return to and would therefore have to look for new jobs, which can take a considerable amount of time. In addition, bankruptcies can be inefficient and reduce the productive capacity of the economy. It is therefore important to try to support businesses during the period of very low economic activity caused by the virus.

Congress, in the CARES Act, established the Paycheck Protection Program to help small businesses, those with fewer than 500 employees. And the Federal Reserve was already supporting larger, less risky companies through its commercial paper and corporate bond purchase programs. But that leaves a substantial pool of riskier, midsize businesses that have received no help. The Main Street Lending Program is aimed at these businesses.

“The Fed and the Treasury want loan terms to be relatively easy for corporate borrowers, but also reasonably attractive for lending banks. This sets up a difficult compromise.

The basic idea is that the Fed and the Treasury help the banks make loans to these companies by agreeing to buy back 95% of the loans made by the banks under the program (with all credit losses covered by the Treasury. ). That is, banks get rid of 95% of loan risk and only need to finance 5% of loans. This should encourage banks to lend to businesses that might be a bit riskier than the banks would want to lend without the program, but it also leaves banks some ‘skin in the game’ – making sure they guarantee lending with some care and don’t end up saddling the Fed and the Treasury with heavy loan losses.

The difficulty with the design of the program is that the Fed and the Treasury want the loan terms to be relatively easy for corporate borrowers, but also reasonably attractive for lending banks, so that borrowers and banks participate in the program. But that sets up a difficult compromise; if the terms are too easy, the banks will not want to lend for fear of possible losses, but if the terms are not easy enough, the targeted firms will not want to borrow. One way around this compromise would be for the Treasury to be prepared to lose money on the program by providing an implicit subsidy on the loans, perhaps in the form of higher fees paid to the banks. But, at least so far, the Treasury has been hesitant, and with current loan conditions, the program has not garnered much interest from potential borrowers or banks.

Given the limited effectiveness of the Main Street program so far, what changes do you think need to be made to strengthen it?

In one recent article I wrote with Nellie Liang from the Brookings Institution, we suggest several changes to the program that we believe would be helpful. First, we believe that the Fed and the Treasury should better tailor lending terms to the needs and risks of potential borrowers. Thus, the program should provide loans at lower rates to more secure borrowers and should be open to smaller loans. At the same time, the program could accept loans from riskier businesses, as long as the lending bank kept a larger share of the loan to ensure it had confidence in the borrower’s creditworthiness. In addition, the program could be made more attractive to potential borrowers by relaxing certain restrictions on borrowers, including requiring them to make a commercially reasonable effort to keep their jobs. Second, commissions paid to banks should be increased to make them more willing to absorb the costs associated with the program and to encourage lending to slightly riskier borrowers.

“Programs such as loan guarantees or rebates could better support struggling businesses and help promote a faster recovery in employment and production and limit long-term damage to the economy.”

These changes would likely mean an increased risk of losses to the Treasury, but we consider such losses to be justified under the current circumstances. Even with our recommended changes, the program may have limited demand as many businesses need equity, not more credit. Additionally, banks may not want to extend more business loans without even greater protection, given the uncertain economic outlook. Thus, we argue that Congress should be prepared to authorize other types of programs, such as loan guarantees or discounts, which could better support struggling businesses and thus help promote a faster recovery in employment. and production and limit the long-term damage to the economy. .

How important is supporting business loans to mitigate the economic impact of COVID-19, compared to other components of the CARES law, such as improving unemployment assistance?

Supporting business loans is clearly only part of the necessary policy response. Many households have lost their jobs and still have to pay for shelter, food and other expenses. Direct transfers to these households are therefore necessary to avoid a flood of household bankruptcies. The CARES Act provided for enhanced unemployment insurance to help these households, as well as direct payments to low- and middle-income households to support spending. These programs have been successful so far and Congress needs to expand them, perhaps with some modifications.

Another key part of the CARES Act was the Paycheck Protection Program (PPP), which provided government guaranteed loans to small businesses. If the proceeds of these loans are spent to pay workers and cover other basic expenses (such as utilities or rent), the loans can be canceled. Thus, PPP loans are, for the most part, grants rather than loans, and therefore should provide significant support to eligible businesses.

More generally, the federal government must fund the medical care of those affected by the virus, the improvement of tests and the development of better treatments and vaccines. Only once we have an effective screening and tracing regime in place, more effective treatments, and ultimately a vaccine, can we truly put the virus behind us.