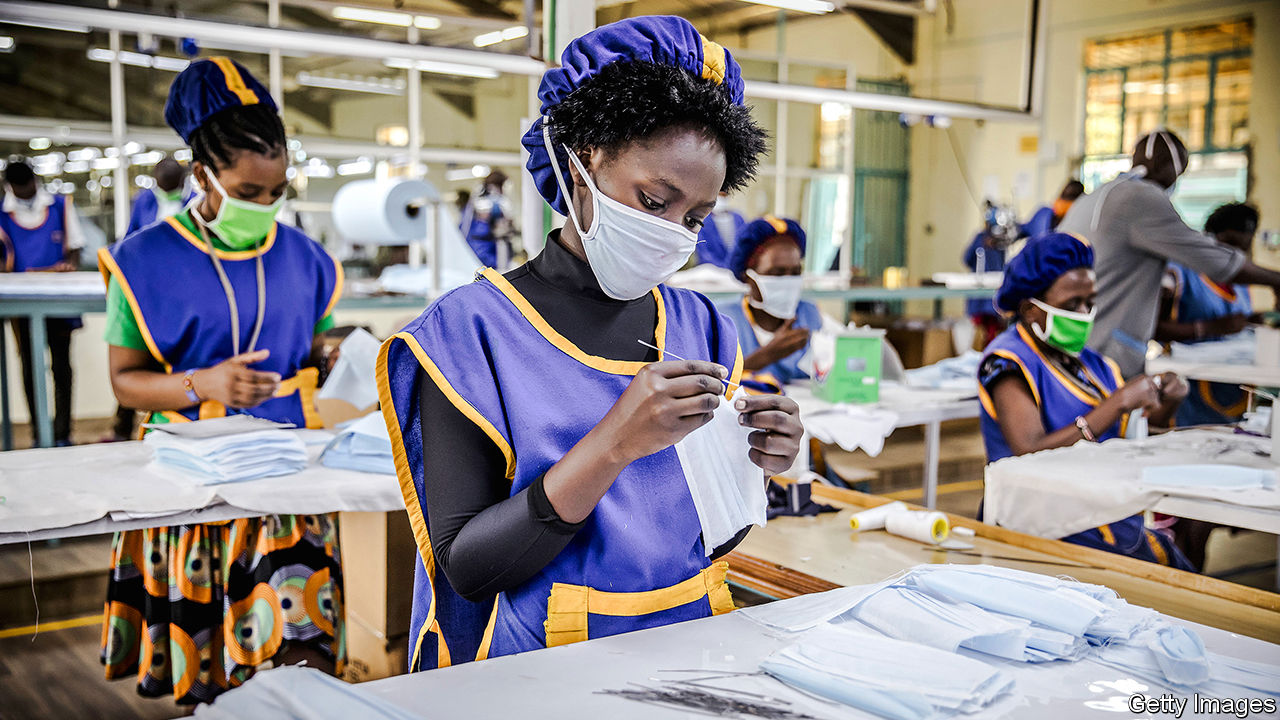 “TTHE FUTURE is here,” says Ibrahima Sarr, pointing to the factories he runs in Senegal. After working and studying for 18 years in Europe, he returned home to help spark a manufacturing revolution. He is now with Africa Development Solutions, a Malian conglomerate, which runs factories that make e-bikes, pipes and, soon, clothes.

Mr. Sarr is not alone in his optimism for manufacturing in Africa. The Diamniadio industrial zone that it overlooks is the centerpiece of Senegal’s ambitious industrialization plan. Elsewhere in the region, Ghana has attracted car assembly plants from Nissan and Volkswagen. Ethiopia, too, has relied heavily on the manufacturing industry.

And the idea of ​​making things captures the imagination of young Africans like Yusuf Bilesanmi, who invented a cheap ventilator that can treat covid-19 patients even in hospitals without electricity. His device was shortlisted for the Royal Academy of Engineering Africa Prize. He wants to produce it in Nigeria after seeing how the pandemic has disrupted the supply of medical equipment in Africa. It will also allow it to create jobs and distribute them more quickly.

This optimism runs counter to received ideas. In 2015, Dani Rodrik of Harvard University published an influential paper showing that manufacturing employment and manufacturing’s share of GDP, were declining in sub-Saharan Africa. This “premature deindustrialization” was deeply worrying. Factories have turned countries like South Korea and China into economic stars. Yet Rodrik’s work has suggested that this lift out of poverty has stalled. (Disclosure: Mr. Rodrik wrote a favorable blurb for a book on a topic unrelated by the author of this article.)

However, a handful of new studies suggest things are looking up. Start with a recent article by Hagen Kruse, University of Groningen, and others. He estimates that the share of people working in manufacturing in sub-Saharan Africa has fallen from 7.2% of the total in 2010 to 8.4%. Although starting at a lower level, this growth looks remarkably Asian, especially after adjusting for income and population (see chart). A long decline in the share of the manufacturing sector GDP bottomed out, and it’s now around 11%. Production has increased by 91% in real terms since 2000. Given such figures, talking about deindustrialization in Africa is “stupid”, says Margaret McMillan of Tufts University. The World Bank, in a recent note, unequivocally asserts that “industrialization remains viable in sub-Saharan Africa”. Even Mr. Rodrik is more optimistic, suggesting that in many African countries the share of workers in manufacturing could reach 20%. That would be more than double current levels, but not quite the peaks seen in Europe, where up to a third of the workforce worked in manufacturing.

There are still huge obstacles. One of the most important is that the increase in factory employment has not been accompanied by the expected improvements in productivity. Some reasons can be found by looking at which companies have improved and which have not. In Tanzania and Ethiopia, most new factory jobs have been created by small, inefficient firms. Although a few large manufacturers have boosted productivity, they haven’t hired much, according to a new paper by, among others, Xinshen Diao and Mia Ellis of the International Food Policy Research Institute, a Washington-based think tank.

One of the reasons for the productivity gap may be that large African firms are linked to global value chains. To sell to companies in wealthy countries, they must use the latest machinery of the highest standards. It can help them learn how to compete in global markets. But, in part because sophisticated machines require fewer workers, they are not yet creating the millions of jobs needed each year for the world’s youngest and fastest growing population.

Even so, there are several paths that African countries can take to both create many more jobs and become more productive (thus making their people wealthier). The first is that the big productive players increase their market share. This would boost overall productivity, but could slow hiring. Yet if they can continue to compete in export markets, they could soon be producing so much that hiring is also picking up. International competition will not be easy. Wages in most parts of Africa (with a few exceptions, such as Ethiopia) are still higher than in the poorest countries of Asia. The same goes for the cost of living, not least because the rutted roads make it expensive to transport food from farms to urban markets. Governments could help attract investment from already successful foreign companies looking for places to build new factories by fixing infrastructure, cutting red tape and improving schools.

These types of investments, along with initiatives to improve access to loans, could help small businesses take shape and new ones get started. A model to emulate could be Vietnam, where companies have increased their productivity and expanded their workforce faster than those in Africa. Its smaller manufacturers invest even more intensively in machinery than the larger ones and are very productive.

Not all countries can create their own version of the German Mittelstand, with medium-sized companies selling globally. But they might have a host of medium-sized companies supplying the big exporters who compete in world markets. Governments can help by easing border bottlenecks to encourage trade in Africa. Eastern Congo may not be a tempting market for companies in China, but it’s a big price tag for food processors in neighboring Rwanda. The World Bank estimates that the new continent-wide free trade area that came into effect this year could more than double intra-African trade in manufactured goods by 2035. This could help combine improvements in productivity and employment, because companies selling to less competitive regional markets do not need to use the latest machinery. Since most African countries have a lot of workers and little capital, this would be more appropriate.

The pandemic has been tough on manufacturers in Africa. At another garment factory in Diamniadio, orders from America have plummeted. Yet, much like manufacturing in Africa, the factory is tougher than it looks: it’s shifted to making face masks. Since Mr. Sarr’s return to Senegal, the pandemic has only strengthened his resolve to encourage industry in Africa. Covid-19 has exposed Africa’s “extreme dependence” on imports and its vulnerability to shocks in supply chains around the world. “He who does”, he says, “has the power”.■