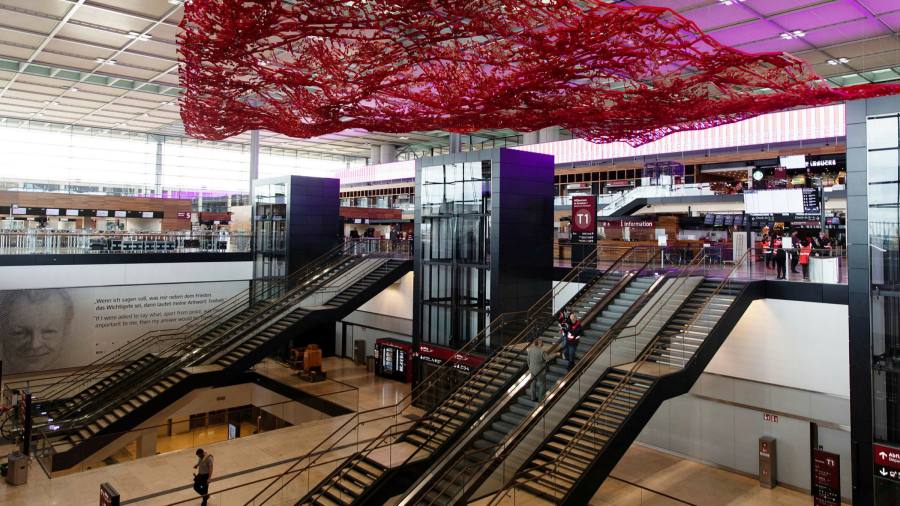 from Berlin new international airport opens on Saturday, nearly a decade behind schedule and three times over budget. The timing, right in the middle of one of the worst crises in global travel, couldn’t be worse.

“It’s a tragedy,” said Katy Krüger, head of terminal management at the airport. “Waiting so long and then this crazy downturn in the industry. It really hurts.”

The opening of BER, as we know, was to be a moment of triumph for Berlin. After years of delay, the city was finally acquiring its own gateway to the world, a gleaming new interconnected hub befitting its status as the capital of Europe’s largest economy.

But the coronavirus pandemic has put an end to that. The BER now has the look and feel of an expensive white elephant, a throwback to a bygone era of mass tourism and global mobility that Covid-19 brought to a screeching halt.

BER will open as “the entire aviation industry is experiencing its worst crisis since World War II,” said Engelbert Lütke Daldrup, its chief executive. “There is not a single airport in Europe that even comes close to normality.”

Mr Lütke Daldrup, a phlegmatic urban planner who was installed in 2017 to save one of Germany’s most disaster-prone construction projects, doesn’t mince words. BER had become a “laughing stock”, he said, adding: “We German engineers are ashamed of it”.

For that reason, he said, there would be no grand opening party on Saturday, when the first flights land. “We’re just going to open,” he said. “There is no reason to brag about this project.”

A sneak preview of BER this week revealed a vast and expensive temple of travel, flooded with light, finished with dark walnut paneling and gleaming sand-limestone floors. The centerpiece is the “Flying Carpet,” a striking red aluminum sculpture by California artist Pae White that dominates the check-in hall.

The BER has four times the space of the small city airport it replaces, Tegel, which had become synonymous with overcrowding, poor services and poor transport links. It also sits atop a new train station that will ferry passengers to and from downtown Berlin in minutes.

Ironically, the diminutive Tegel would probably be better suited to the pandemic era; Berlin airports currently handle only 25,000 passengers a day, a quarter of last year’s level. The original plan for BER to handle 55 million passengers a year now looks like a pipe dream.

“We are facing a very, very difficult winter,” said Lütke Daldrup. German airports will suffer a combined €2bn drop in revenue this year, he said, with the BER facing a €300m hit.

The airport, which cost nearly €6 billion – three times its original price – was due to start making a profit from 2025 and repay its €3.5 billion in loans over the next 10 years following.

Instead, it will require additional funding of more than €300 million this year, including €50-60 million from internal cost-cutting measures and €260 million from airport shareholders. – the German federal government and the authorities of Berlin and Brandenburg. It will be a bitter pill to swallow – German taxpayers are already responsible for more than a third of the cost of the project.

Even before the pandemic hit, BER suffered from a significant weakness: it has far fewer international connections than other major European cities. Of more than 100 long-haul routes to western Germany last year, only seven were to Berlin, Lütke Daldrup said.

“We are in the same category as the smallest and most insignificant European capitals,” he acknowledged. Tourists wishing to visit Berlin from Asia still had to fly to Prague and take the bus.

Still, the fact that BER opens at all is for many a small miracle. The project was hampered by technical difficulties, incompetent planning and dizzying changes in direction. The ground was first laid on the site 14 years ago, but the official opening ceremony in 2012 had to be canceled when it emerged that the airport’s fire prevention system was not working .

For Ms. Krüger, the terminal manager who has worked at BER for a decade, finally being able to open after so many delays will be a moment to savor.

“It’s like I finally got rid of my old nightmare,” she said. “But it’s sad to do it when we have so few passengers coming here. We are not used to this in Berlin.

Latest news on the coronavirus