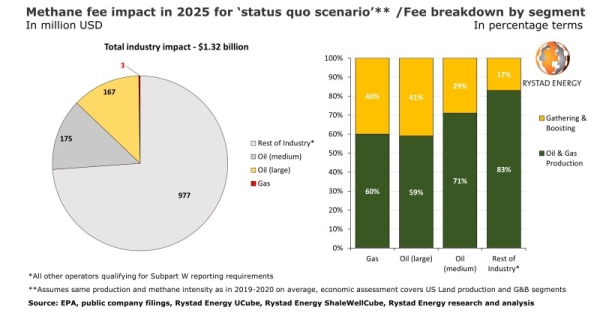 OSLO – The “methane tax”, part of the amended Build Back Better Act published by the House Rules Committee in the United States, could cost the oil and natural gas industry $ 1.3 billion in 2025 in a business-as-usual scenario, according to an analysis by Rystad Energy. shows.

Although the latest bill relaxes some of the previously proposed regulations, the latest iteration will still have a profound economic impact, especially on small onshore producers.

Even though the bill would come into force in 2023, the phased introduction – 60% in 2023, 80% in 2024, and 100% in 2025 – means that the full effect will not be felt until the middle of the decade. The estimated cost impact of $ 1.3 billion in 2025 assumes that producers maintain their methane production and intensity at 2019-20 levels on average. The intensity of methane is improving rapidly, however.

“The actual impact in 2025 will be less than $ 1 billion based on base case production growth and expected improvements in methane intensity. It is important to stress that the real impact will be even more skewed in favor of small producers and traditional fields, contrary to what the current status quo suggests, ”said Artem Abramov, head of shale research at Rystad Energy. .

Methane intensity is improving rapidly for most companies based on the Subpart W accounting methodology, so by 2025 many key producers will all be below the intensity thresholds proposed in the latest version. On the other hand, the Environmental Protection Agency (EPA) still has a plan to reduce the reporting threshold for Subpart W from 25,000 to 10,000 tonnes of CO2e per year.

If implemented, we will see more small producers included in the methane charge calculation and they typically have higher methane intensity levels than their larger peers.

“Despite its impact – and compared to the original methane bill introduced in March 2021 – the revised methane levy is a much more flexible proposal that arguably introduces a more justified calculation formula,” Abramov added.

Small producers can pay the price

To understand the potential economic implications for the industry, it is important to examine how the sector has progressed in terms of methane intensity – the ratio of methane emissions to natural gas produced – in accordance with the reporting standards of the sub- part W. Recent history shows that the industry has steadily improved its methane intensity since 2016, especially the larger producers.

Rystad Energy’s analysis estimates the annual costs per operator for large producers at just $ 7.5 million, roughly the equivalent of drilling a 2-mile-long horizontal well in the Midland Basin today. ‘hui.

If we convert these figures to variable incremental costs or normalize them to production levels, the average impact is only four cents per barrel of oil equivalent (boe), based on three gross flows operated, with only a handful of large producers seeing an impact above 10 cents per boe, based on their 2019-20 performance.

Therefore, given the steady improvements in methane intensity that the industry was able to make between 2016 and 2020, it will not be surprising that most major operators fall below minimum emissions in the first year of operation. the new rule.

For this reason, we predict that the number of key oil and gas producers who will be subject to the proposed royalty – those whose methane intensity levels exceed the allowed thresholds of 0.2% for production and 0, 05% for collection and reinforcement (G&B) – will be relatively low.

So, even in a business-as-usual scenario, where industry performance is maintained, the annual methane royalty of $ 1.3 billion will be largely borne by small producers, who will still be eligible for the reporting requirements in Canada. under subpart W.

If the EPA expands the methane royalty plan reporting requirement and lowers the threshold from 25,000 to 10,000 tonnes of CO2e per year, the annual impact on industry would exceed $ 1 billion, even in a scenario where performance improves continuously. In such a case, the economic impact of the proposal will be even more skewed in favor of small producers.

The distribution of methane emissions between G&B and production is essential to quantify the theoretical impact of the royalty for oil and gas operators, because the methane intensity thresholds authorized in the proposal are different: 0.2% for production and 0.05% for G&B.

Although the exclusion of the G&B segment will not have a significant impact on the methane intensity of many operators, in cases where the production intensity is less than the ratio of Scope 1’s total methane emissions to based on gross production operated, the G & B segment will represent a significant share of total emissions. This is particularly the case for several large and medium oil producers. – Rystad Energy