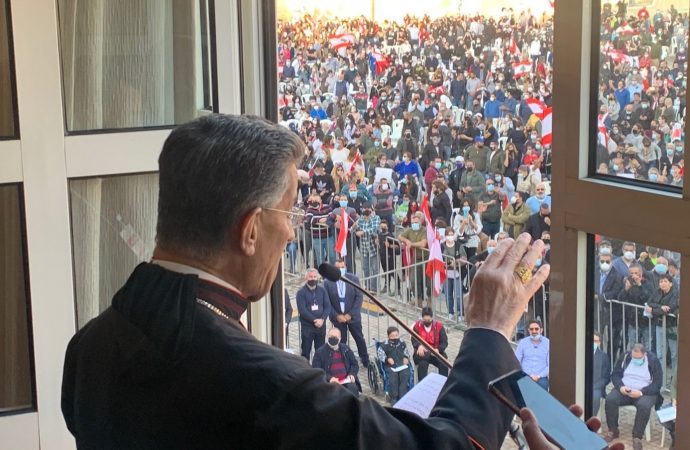 
In response to a letter from Lebanon’s bishops and patriarchs calling for European intervention as the country plunges further into a black hole, European bishops pledged their support and called on government leaders to act.

In a letter from the Assembly of Catholic Patriarchs and Bishops of Lebanon (APECL) to the Commission on Episcopal Conferences of the European Union (COMECE), leading Lebanese prelates expressed concern about the increased risks people face. in the political and social context of the country. , health and economic crisis.

Signed by Father Claude Nadra, secretary general of APECL; Bishop Youssef Soueif of Tripoli and chairman of the ad hoc committee; and Cardinal Bechara Boutros Rai, Patriarch of Antioch and President of APECL; the letter was written in April but released on May 26.

In the letter, Rai, Soueif and Nadra noted that Pope Francis has often called on the international community to support Lebanon, “which is going through a deep crisis and risks losing its identity as a country of plurality, freedom and brotherhood. . “

They stressed the importance of the Christian presence in Lebanon, asserting that Christians “must not be reduced to the status of a minority under protection”.

On its own, Lebanon cannot maintain the continued presence of the hundreds of thousands of displaced Syrian and Palestinian refugees still stranded in the country, “for whom strong support from the international community is requested,” they said.

The prelates called on the international community to help the Lebanese people first by “ensuring the maintenance of their individual, collective and national rights, fully in force, without any restriction or alteration of any kind”.

World leaders were called upon to help alleviate the financial crisis in Lebanon in order to protect the country’s social fabric and prevent the loss of its “identity and uniqueness”.

The support of the Christian population in Lebanon through ecclesial institutions was also requested, which, according to them, “are and will always remain at the service of all citizens without distinction or discrimination, and will continue to work tirelessly for the common good. “.

The identity of Lebanon, they said, is forged on “the meeting between all its communities, based on the values ​​of freedom, human dignity, pluralism, as well as peace, respect and love for neighbor” , which makes Lebanon a natural place for “dialogue between the diversity of religious and cultural communities.” “

“These fundamental values ​​of citizenship and freedom are the backbone of the construction of a Lebanon which wants to continue to be, for our time and our world, a message of freedom and a witness of a harmonious coexistence”, have- they stated.

However, they warned that this identity is threatened by “the political, economic, social, demographic and security crisis which has hit the country and constitutes a real threat”.

It is the task of the Church, through her health, educational and social institutions, they said, to accompany “all generations, of various affiliations”, in the construction of a culture of peace and dialogue. , “Thus respecting the principle of solidarity and strengthening the cohesion of the social fabric, which is at the heart of the Lebanese identity.

Lebanon has been crippled for years by an economic crisis which, so far, has plunged around half of its population into poverty. With the local currency losing about 85 percent of its value in the past year alone, it has become increasingly difficult for many families to obtain basic food items.

Due in large part to the COVID-19 pandemic, Lebanon in 2020 saw its currency plunge to record levels, and a devastating explosion at a Beirut port in August exacerbated the crisis, killing around 200 people and injuring around 6000 others while it destroyed several. neighborhoods in the region.

Lebanese Prime Minister Hassan Diab and his government have resigned following the deadly explosion in Beirut, but a government has yet to be formed, meaning the country has been leaderless for 10 months as it tries to go through a worsening crisis.

As Lebanon draws on its last financial reserves, the international community has pledged support on the condition that the country forms a government and initiates massive economic and structural reforms.

For years, several foreign states and organizations have pledged to grant Lebanon billions in loans to rebuild its infrastructure, including the destroyed port, and an International Monetary Fund program to ease the pressure of the financial crisis.

Shortly after the Beirut explosion last August, French President Emmanuel Macron visited Lebanon and, along with other world leaders, pledged some $ 300 million in humanitarian aid on the condition that reforms structural measures are implemented.

He returned a few weeks later, pushing for the formation of a government and the implementation of reforms before aid money was distributed, offering leaders an economic roadmap that has since been dubbed “The French initiative” providing for the overhaul of the electricity sector in Lebanon, audits of the country’s central bank accounts and resumption of negotiations with the International Monetary Fund.

At the time, the Lebanese leadership promised to follow this plan, but so far nothing has been done.

Lebanese President Michel Aoun and Prime Minister Saad Hariri have so far been unable to agree on a cabinet, with most of the dispute focusing on the number of ministers and how they will be positioned counts given sectarian and political sensibilities.

In its response to the APECL letter, COMECE stated that it shared the concerns of the local Church, “and expressed its solidarity with Lebanese society, which is enriched by a mosaic of communities, including refugees. Syrians and Palestinians ”.

“In the absence of effective policies and public actions,” the Church and faith-based actors, including the international charities Caritas International and L’Œuvre d’Orient, provide “essential humanitarian services to all communities” COMECE said, but warned that the company – the economic crisis and the current COVID-19 pandemic continue to pose “an existential threat to many of their operations.”

“Therefore, we encourage the EU to seek creative ways of engaging and partnering with churches and religious actors on the ground,” he said.