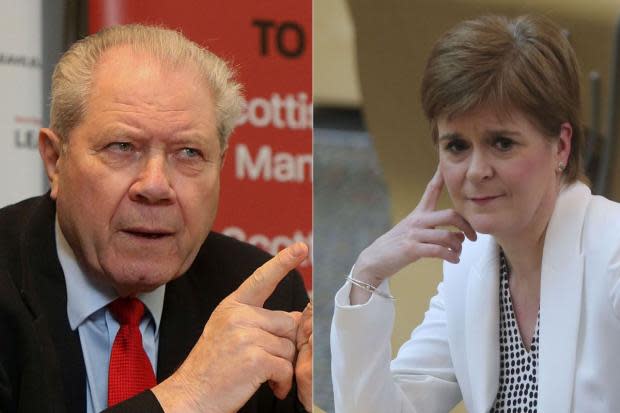 NICOLA Sturgeon is hopelessly ‘ill-prepared’ for an independence referendum and should not even try to hold one next year, a former SNP deputy leader has claimed.

Jim Sillars said “illusion” dominated the SNP-Green administration and its shortcomings had left the Yes movement without the materials it needed for victory.

He said the Scottish government’s “mediocrity” and “gross incompetence” meant it was simply unable to produce a winning prospectus to leave the UK.

Mr Sillars, who was deputy leader of Alex Salmond’s SNP in the early 1980s, makes his comments in an article in the Scotland’s Future series in today’s Herald.

His intervention comes at the end of a week in which the SNP has been attacked for falsely claiming that the UK will pay Scottish state pensions after a yes vote, only to later accept the Scottish government would do so after a negotiation on assets and liabilities.

Ms Sturgeon has said she wants to have Indyref2 by the end of 2023, Covid permitting, but Boris Johnson has refused to grant Holyrood the power it needs to hold it.

Despite the deadlock, the prime minister has instructed officials to write a new independence white paper and prepare a potentially doomed referendum bill.

Mr Sillars scoffed at the idea that the Scottish Government was up to the task, citing a list of its recent failures on ScotWind, CalMac, Prestiwck Airport and school standards.

“Are we to believe that this government, a mixture of ministerial and civil service mediocrity, which has put us in a state of stasis, can produce a White Paper which projects a dynamic, innovative, ambitious society, capable of creating global prosperity ? we never knew?

“Is this lot, who thinks £700million is a good dividend from wind farm development, who can’t deliver two ferries, doesn’t know what to do with an airport and has failed to deliver a good education for every child, is the great engine of change that will carry us towards independence? I doubt.”

He said those in the Yes movement who would rather ignore these issues – the “Wheesht for Indy” sang – should be ashamed.

Meanwhile, their Unionist opponents were working out how to stop independence.

“During the lost six years, filled with promise indyref2, they thought in the south of better ways to save the Union than a repeat of Project Fear,” he said.

Mr Sillars said he expected the UK government to eventually offer voters the choice between independence and greater devolution, or Devo Max, and not simply the status quo.

He said: ‘How well prepared is the SNP if they ever get a message saying, ‘Yes you can have a referendum on the terms – independence vs devo max?

“Sovereignty is far superior, but we will have to prove it.”

Commenting on an SNP spokesperson, he said: “Jim Sillars has called for independence to be ‘deprioritized’ – while the SNP government is focused on winning independence by holding the referendum for which there is a cast iron democratic mandate”.

NOTICE | Mining, like other industries in South Africa, is tackling gender-based violence