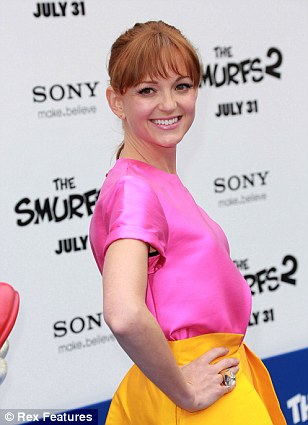 You are filming The millers, the new Comedy Central sitcom created by the man behind family guy and My name is earl. How’s it going?

This is my first time filming in front of a live studio audience, other than a few guest appearances. It’s scary and empowering, and I have butterflies every night, but I love it. Getting immediate public reaction if it works – or, worse, doesn’t work – is great. But completely terrifying.

Do you identify with your character (Jayma plays Debbie whose father moves in with her and her husband after her divorce from her mother)?

One way I really feel like her is when my parents are around me now, I go back to being the kid I was 30 years ago. It has never left me – I am becoming a complete monster. I am annoying and sarcastic with them. And then when they get home, it goes.

And was it worth it to leave Glee for this? You played teacher Emma Pillsbury for a long time …

But even after five years, I’m still amazed to work with Jane Lynch. Leaving [at the end of the current series] was not my decision and I will be very sad to say goodbye, but Glee thrives on new blood. The writers are very talented and if they think it’s time for Emma to go then I hope they’re right.

Have you caught the young acting bug?

I loved Cheers and I was obsessed with Goldie Hawn, but I never thought this could happen to me. I grew up in a small town [Bristol, Tennessee] and there were no arts programs or classes at school. So I was originally going to study medicine. Looking back, it seems like a horrible idea: who would want me as a doctor? When I changed my degree to becoming an actor, I almost gave my parents heart attacks.

You are married to British actor Adam Campbell (the couple met on the set of the 2007 Epic Movie parody and got married that same year). What is it like to live with a Brit?

Honestly, there should always be a pot of Marmite in the cupboard. And a bag of fruit gums. It’s living with a Brit for me. But I still feel dizzy to talk about him. He’s the funniest person I know, and he’s incredibly hot, which always helps.

Did he make you Briton of honor?

I don’t like the UK at all but I would love to be in the Lake District right now, a faithful sheepdog by my side: it is the most beautiful place in the world. And we are obsessed with a lot of British thriller dramas. I watch Broadchurch at the moment i love Luther, and before that, it was The fall for me.

Who would be your dream date for dinner?

I have a weird crush on Meryl Streep. But the problem with having dinner with her would be that I would be so nervous that I couldn’t speak. And for our meal – this just got married to a Brit – we would have a really creamy chicken tikka masala.

The millers is on Comedy Central, Mondays at 9:30 p.m.