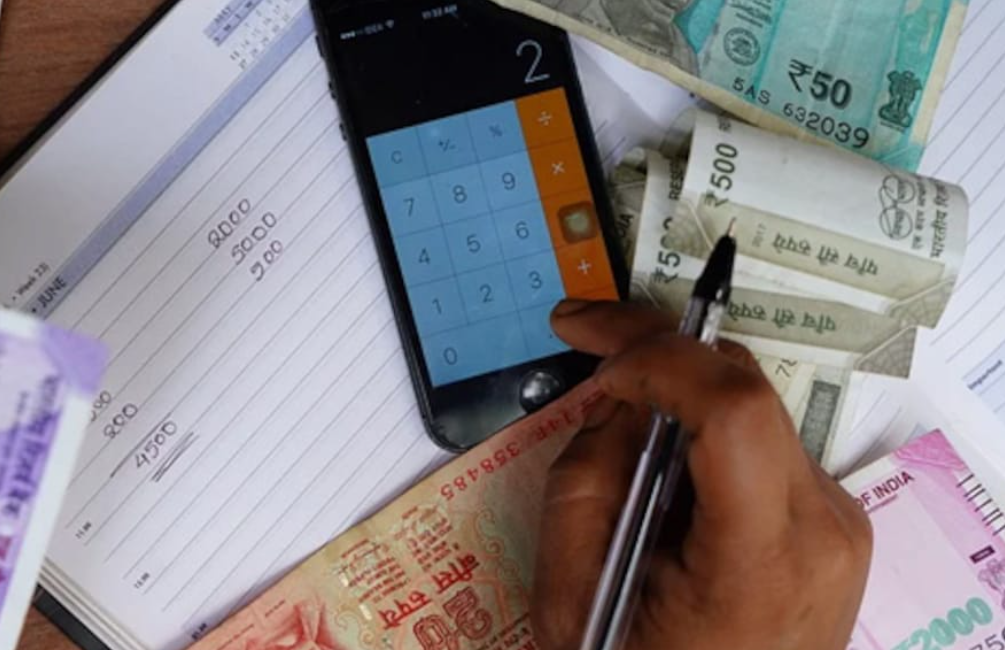 Household wage growth fell from 8.2% in 2012-2016 to 5.7% in 2017-2021, according a new study from a rating agency. It will actually be even lower – around 1% – if inflation is taken into account. This slowdown in wage growth occurred in both rural and urban areas. In rural areas wages increased by a meager 2.8%, while in urban areas the increase was 5.5%. Once adjusted for current inflation, these growth rates become negative. In rural areas, inflation-adjusted wage growth would have been (-) 3.7%, while in urban areas it would have been (-) 1.6%. This means that real wages fell over the period 2017-21.

Despite celebrating higher economic growth in recent months, falling incomes mean people as a whole don’t have enough purchasing power in their hands. These households contribute substantially to economic production, representing 44 to 45% of gross value added (GVA). The continued weakness in incomes means that their contribution to aggregate demand will be very small. This, in turn, means that the chances of an economic recovery are low as there will not be sufficient demand in the economy.

Finance Minister Nirmala Sitharaman’s homilies to India’s corporate sector to invest more (and therefore create more jobs) will fall on deaf ears as the corporate sector benefits from all concessions and tax cuts that the Modi government has offered without having to invest more. He will not invest more because who will buy? People just don’t have the buying power in their hands.

The government has stopped publishing consumer expenditure surveys that would be a proxy for household incomes. However, Periodic Labor Force Surveys (PLFS) provide estimates of the earnings of the three main types of workers based on their recall of the previous week’s work status. These three categories are regular employees, occasional day laborers and the self-employed.

The latest PLFS annual report published in June this year covers the period from April 2020 to March 2021. According to this report, in rural areas, the predominant share of households (55%) are self-employed, largely in agriculture. Next comes casual work (24%), which is often seasonal and irregular work paid by the day. Regular and salaried workers represent only 13% of rural households. (See table below)

In urban areas, regular workers make up 43% of households while the self-employed make up 33%. Casual workers represent 13%.

LOWER INCOME IN ALL JOBS

Let’s take a look at the average earnings of these three household types, shown in the chart below. Apart from regular male urban workers who earn just over Rs 21,000/month, none of the other categories of workers earn sufficient wages to lead a dignified life, free from want and struggle. What is striking in this graph is the deep chasm between rural and urban incomes, the incomes of men and women, and the incomes of regular employees and casual workers or even the self-employed. 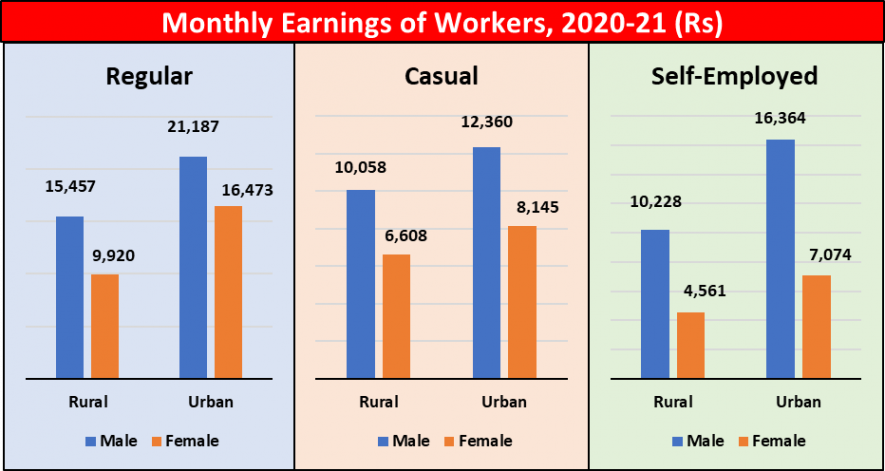 In rural areas, the largest category of employees is the self-employed, mainly farmers. In this work, men earn 10,228 rupees per month, while women earn less than half (4,561 rupees). Casual workers who work for a daily wage and suffer very harsh working conditions are the lowest paid of all. Even in urban areas, a male casual worker will only earn Rs 10,058/month, while female will only receive Rs 6,608. In urban areas, earnings are slightly better at Rs 12,360 for men and Rs 8 145 for women. These monthly wages for casual workers are projected from daily earnings data collected in the PLFS. In reality, there will be days when there is no work interspersed with working days.

The extremely low pay levels of female workers in all fields – whether rural or urban, whether casual, regular or even self-employed – reveal one of the reasons for women’s low labor participation rates. With that kind of pay, and with all the other hardships of getting out to work, including the double burden of having to do all the work at home, it’s no surprise that women are actively discouraged from working.

WHAT CAN THE GOVERNMENT. DO?

Three transformative steps must be taken by the government if the dire situation is to be salvaged and some relief offered to struggling working families. These are:

1. Raise the minimum wage for unskilled industrial workers and establishment employees to Rs 26,000 per month and provide a dearness allowance (DA) linked to inflation. The salaries of other categories such as semi-skilled and skilled workers or office workers and others will have to be increased accordingly. This will not only mean central notification for central government workers/employees, but also state-level notifications. The demand of Rs 26,000, put forward by the 10 central unions, is based on the accepted formula of 2,300 kcal food equivalent for a family of three units and additional expenses for clothing, rent, etc., and the judgment of the 1991 Supreme Court in Brett Raptakos which directed an additional 25% hike for children’s education and other family expenses.

3. Adopt a law guaranteeing a minimum support price to farmers for a range of agricultural products. This MSP should be calculated as 150% of the overall cost of production (called C2), as recommended almost twenty years ago by the National Farmers Commission headed by MS Swaminathan. This demand is also supported by most farmers’ organisations.

Once these steps are taken, the country can really be put on the right path to becoming a superpower and start tackling the issues of malnutrition, unemployment, disease and lack of education. The Modi government will have to abandon its current policy of simply helping the rich and persuading them to invest more or create jobs.