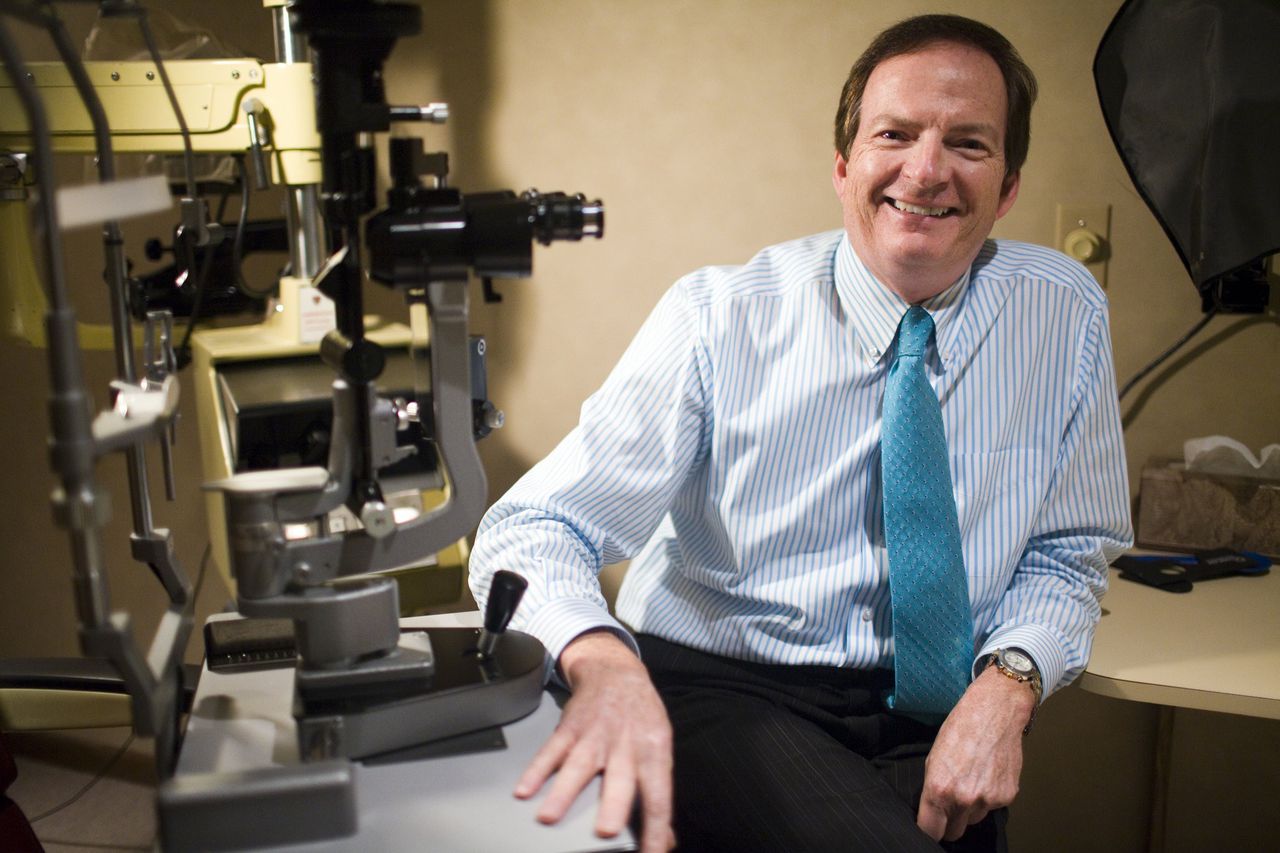 Why did you enter ophthalmology?

I worked as an ophthalmic technician for 12 years at Flint. I may have had a midlife crisis. I was about 40 and could see down the road. I knew I didn’t want to do this at 50. I had a friend who went to medical school in his forties. I took the MCATs and applied. Next thing I know, I got accepted into Michigan State Medical School.

I started medical school just two months before my 40th birthday. I was not the oldest in my class; there were a few people in their forties and a woman in her early fifties.

There was an electrical engineer at AC doing the same thing. We both went to East Lansing for two years. I did my clinical internship here in Flint.

How did you manage to go back to school for eight years?

My wife worked at McLaren as a nuclear medicine technician, so she worked while I was saving money and borrowing. I had to borrow a lot. You are getting by and you are in great debt. It was like taking three steps back to take a step forward.

I finished my residency in 2000. Eight years of being broke was the hardest part. I liked school. It happened very quickly. I decided to stay here. I heard that Clifford Cox was looking for an associate and possibly someone to resume his practice when he retired. I took over his practice three years later.

Have you paid off the debt?

I still haven’t paid it 11 years later. I teach rotating MSU medical students. Some of these kids are coming out of medical school with a quarter or half a million dollars in debt. I feel for them. We’ll get there. It is not common to have student loans to repay at age 58.

What would you do if you weren’t an ophthalmologist?

I should have done something else. You settle in, you get married, you buy a house. All of a sudden, a dozen years go by. I may still be an ophthalmic technician. It would have driven me crazy. The work was not satisfactory.

A lot of people do a lateral movement. They go elsewhere for 50 cents more an hour. I decided to go big. If you’re going to do something else, you might as well do something big. It was fun to be in med school. I have a lot of friends who are much younger than me. We have a larger circle of friends because of it.

Well, I would love to go to Hawaii. I’ve never been there. I don’t think my wife would want to be on a plane that long. I would like to go to Spain or Italy. I haven’t been to any of those. I would go for the food and the scenery, both. Sangria, whatever they serve there. We were in Belgium and France several years ago. Once I started medical school, it really cramped up the journey.

Are you a dog or a cat person?

We have three cats: Teddy, Calvin and Chanel. They just seemed to be their names. Chanel was a barn cat. It’s a calico. The other two are orange tabbies. It’s our menagerie at home.

I never had dogs growing up. My father didn’t like dogs. We are too far gone to take care of the dogs.

Cats are easier to care for, although they are always vomiting somewhere. Now we take them to Wag and Purr when we travel. It is quite luxurious. They have their own cat room with a big screen TV with an aquarium playing on it. It came out to Holly. It’s a bit of a hike, but it’s nice. They started this business by building this elaborate two-story kennel system. It is becoming quite popular. They are very dedicated and love animals. It’s nicer than taking them to the vet and putting them in a cage. They are on vacation when they are there. It’s not easy to collect them and put them in their baby carriers to get home.

What are you doing for fun?

I sing the bass first with the Flint Master Singers. I have been with them for 10 years. We show tunes, patriotic songs, old standards. We do the Blueberry Festival, retirement homes, assisted living facilities. There is going to be an open house at the Sunset Hills Mausoleum.

I used to walk to kindergarten singing the “Davy Crockett” theme at the top of my lungs. I was totally oblivious to anyone listening to me. I have been singing for a long time.

My wife and I did “Jesus Christ Superstar” with the Flint Community Players. She was in “The Full Monty”. She had such a great time. She said, “Why don’t you come and try for ‘Jesus Christ Superstar?’ “We had little pieces in there. Now we are going to do “The King and Me” in September. I will be singing at our neighbor’s daughter’s wedding in October during the service. I’m not a “wedding singer” like Adam Sandler or anything.

I play an English diplomat in “The King and I”. I wear a monocle and dance with Anna. I don’t have much of a role, so that’s good. It’s down to business now. It’s just a ball, great fun. It should be a good family show. There are a lot of kids in it, so they’ll bring their parents. “Jesus Christ Superstar” has sold a few shows. I hope “The King and I” will too. Make sure you get your tickets!