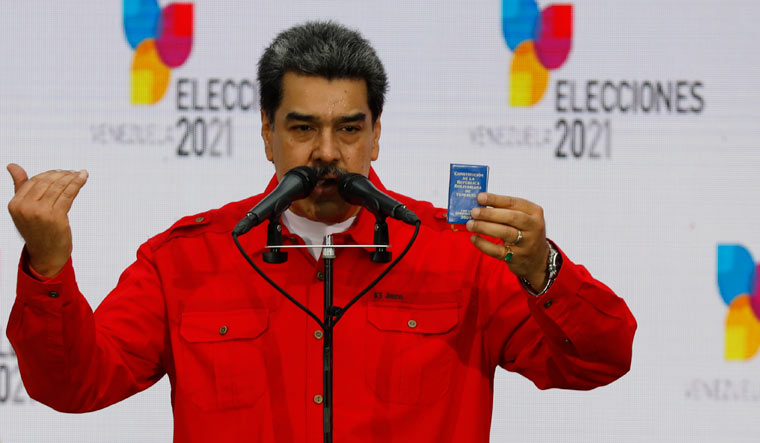 The elections were relatively fair and free, although the government abused its powers to some extent. The European Union and The Carter Center, which monitored the election, did not report any flagrant rigging or other serious irregularities. The turnout was 42 percent.

This is the first time that the opposition parties have participated in the elections since 2017. They boycotted the previous presidential (2018) and legislative (2020) elections.

Juan Guaido, the so-called interim president recognized by the United States, boycotted the elections and did not vote. He is even more isolated and discredited. The Lima group, which supported Guaido, also lost credibility after Peru’s new left-wing government returned to President Maduro’s recognition. The European Union, which had joined with the United States in supporting Guaido, has all but withdrawn its recognition of Guaido. He began to deal with Maduro’s government and had sent an observation mission to monitor the November 21 elections. It’s a big blow for Guaido. Aware of his powerlessness, Guaido has now called for opposition unity and continued engagement with Maduro’s regime.

President Maduro has ruled out continuing negotiations with the opposition until the “kidnapping” of a prominent government envoy, Alex Saab, who has been extradited to the United States, is ended. Last month, the Venezuelan government withdrew from negotiations in Mexico, which began in August after Saab’s extradition in October. Saab, a Colombian businessman, is accused by US prosecutors in Miami of money laundering for the Maduro regime.

The election results strengthened President Maduro’s regime while revealing the weakness of the divided opposition. President Maduro now has the upper hand in his relations with the opposition as well as with the United States, which is seeking “regime change” in Venezuela. It seems that the opposition has to live with the reality of Maduro as president until 2024. This means the temporary end of the internal political crisis.

It is time for opposition leaders to do some serious soul-searching and formulate effective strategies to end the authoritarian Chavist regime and restore proper democracy. They must do this internally and constitutionally without resorting to Uncle Sam for external intervention.

Learning from its mistakes, the government has changed its strategy. It has enabled the private sector to do business and earn money. It lifted price controls on commodities and allowed duty-free imports. There is virtually no tax application on businesses and individuals. More importantly, the US dollar, which has long been despised by the ruling regime as a tool of imperialist control, is now seen as the de facto national currency. Remittances from Venezuelan emigrants are added to foreign exchange reserves.

At the same time, the rich, who had kept dollars abroad, are bringing them home to take advantage of new profitable business opportunities. The government no longer subsidizes food, fuel or services, and private companies have the opportunity to fill the void. Food and medicine shortages have been alleviated as vendors, who were previously subject to rigid price caps set by the state, can now charge high prices for their goods and services. The stores are filled with imported goods for those who can afford to pay in dollars. The government even authorized the opening of casinos.

For now, Venezuela’s dark days are over, both economically and politically. The situation can only improve in the years to come.

The author is an expert on Latin American affairs.