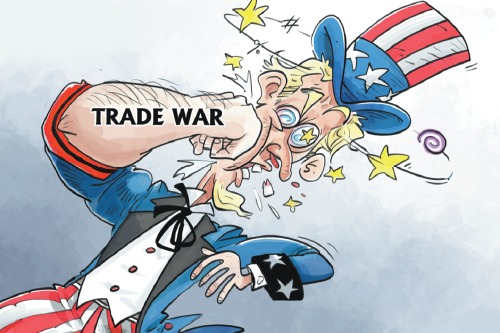 The mission of the United States and its allies in the systematic approach to containing China is now more evident than ever. The establishment of a maritime blockade against China in the South China Sea and the creation of a global NATO are two aspects of this strategy that are of great concern. According to NATO’s 2030 agenda, these two actions aim to bring NATO to China’s borders and ultimately break through its security loopholes. Stirring up conflict on disputed borders with India and aiding terrorists on China’s western borders are also part of the strategy.

After the fall of the Soviet Union and the end of the Cold War, this aggressive view is at the root of the current world order; a point of view that sees itself as perfect, thorough, pure and without error. It ignores any legislation it deems objectionable and takes no responsibility for any government agency, treaty or international agreement. Only a small part of the strategic misdeeds that the United States has created in the world order are evident in their actions. The intervention in Kosovo in 1999 or the attack on Iraq on the pretext of finding weapons of mass destruction in 2003 after failing to meet the demands of the Security Council or the persecution of prisoners in the prisons of Abu Ghraib and of Guantanamo are only a small part of the horror created by the United States in the interwar period. The country believes that it occupies the highest position and has the power to interpret all the phenomena of the world as it pleases. History shows that US authorities openly proclaimed that “we stand tall and look further into the future than other countries” after the end of the Cold War. This view now calls for a global confrontation against China.

Since Republican Newt Gingrich visited in 1997, none of the speakers in the US House of Representatives had been to Taiwan before Pelosi. What American institutions and think tanks said during Pelosi’s visit is reminiscent of the Opium Wars, demonstrating the belief that American goals must be achieved at all costs.

The United States tells China that if it does not follow the American order or if the decline of the United States continues, Beijing will also be attacked, citing historical precedent. The US strategy is to prevent China from taking advantage of the international system and push it towards war with Taiwan. In other words, the West seeks to cut the corridors of Beijing and to separate China from the supply chain, which can occur at the same time as a confrontation with Taiwan and the imposition of economic sanctions and harsh military. This could lead to the division of the western regions of Hong Kong and China.

To policy makers in Beijing, Deng Xiaoping offered sage advice: “Observe calmly; secure our position; manage affairs calmly; hide our abilities and bide your time; be good at maintaining a low profile; and never claim leadership. Therefore, understanding the transition and detaching Beijing from the existing order to create a parallel or alternative one is of the utmost importance in the current circumstances where the American international order is deteriorating.

Chinese policymakers now believe that Washington is committed to implementing Beijing’s comprehensive containment strategy. Beijing is facing issues with the Quad (US, Japan, India and Australia), AUKUS (US, Britain and Australia), as well as the potential inclusion of South Korea in the Quad . According to some Chinese scholars, China should dissociate itself from the US-led order and stop paying the United States a peace dividend in the wake of the US containment policy.

Three crucial methods that can support China’s position in this decoupling are to strengthen its position in the global supply chain, increase its influence in international trade sea lanes, and strengthen the Belt and Road Initiative. “. China has set up independent organizations that are much like a world government in its trade and economic cooperation. These organizations, such as the Belt and Road Initiative, the Asian Infrastructure Investment Bank, and the New Development Bank, have the potential to replace the degenerating international order with economic infrastructure.

The conversion of the intermediate exchange into gold, or the replacement of the dollar by the yuan, is the other principle of the Chinese international system.

This initiative could succeed if there is a growing effort to develop and implement a mechanism similar to the SWIFT banking system or something like the gas-yuan idea proposed by Chinese strategists in 2017. In China, the notion of switch from dollar to dollar the yuan has a long history. Dai Xianglong, then president of the People’s Bank of China, said the same thing in 1999: “The international monetary system must be reformed” because “the role of international reserve currency played by the national currencies of some countries has been a source of major cause of instability in the international monetary system”.

All things considered, perhaps it is better for China to pursue the alternative of forming new blocs, non-Western institutionalization, and ultimately changing and transforming the current order from one based on the hierarchy to an order based on peace, equality and mutual aid. cooperation with the aligned countries before reaching the final phase of the confrontation with the United States. If AUKUS is implemented, NATO expands into East Asia and Australia acquires nuclear submarines, a final Chinese blockade and the imposition of US demands on Beijing are not out of the question. question, especially if Russia loses in the conflict in Ukraine.

Accordingly, one of the key elements of China’s strategy against Western restrictions is to establish a yuan-based global trading system and work to increase its pricing power, which can both reduce China’s vulnerability in global trade and serve as a basis for the formation of new Chinese blocs consisting of BRICS, Central Asia, Venezuela, Iran and Nigeria.

Thus, oil exporters have the option of exchanging their oil revenues for credit or gold on the Shanghai and Hong Kong gold exchanges. This capacity for mutual conversion demonstrates that China, the largest oil importer and holder of the world’s largest reserves, is entitled to the best conditions for the indirect oil trade using gold; it could mark the start of new pricing models for an important global commodity. With the help of its allies and partners, Beijing has the capacity to set up a new system.