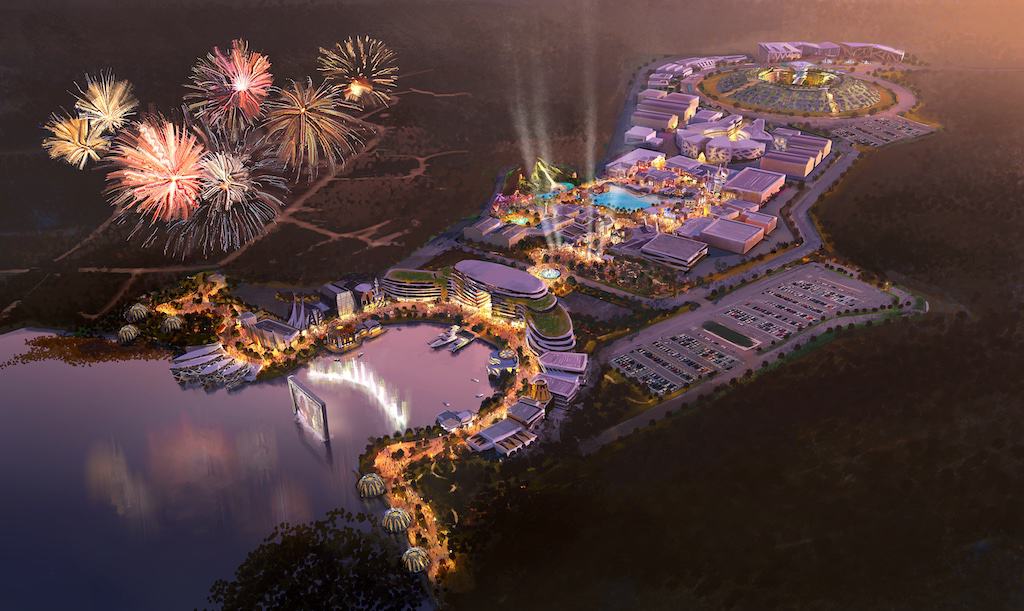 storyland studios, the three-dimensional storytelling firm, announced that its partner on this project, Del-York International Group, has signed an agreement with the government of Lagos State, Nigeria. This agreement formalizes the city of studios, called to revolutionize the Nigerian film industry.

After the completion of the blue sky phase, the name of the studio town has now been revealed as Kebulania. This is inspired by the ancient indigenous name of the African continent, Alkebulan, which translates to “mother of mankind” or “Garden of Eden.”

“The name of Kebulania, indeed, is rooted in the ground where it will be planted,” says Ben Thompson, Chief Strategy Officer at Storyland Studios. “It’s a symbol that this will be a creative epicenter for the continent.”

Linus IdahosaPresident and CEO of Del-York International and Babajide Sanwo-Olu, Governor of Lagos State, signed the Memorandum of Understanding (MOU) at the annual Lagos Investor Summit, Ehingbeti, on October 11. The objective of this partnership is to create a leading destination for cinema and creativity throughout Africa.

“The signing is an exciting step towards the implementation of Kebulania,” says Idahosa. “This is an important step on the road to construction.”

The team is expected to begin construction in the first quarter of 2023 and this will take place over a two-year period. Mel McGowanthe creative director of Storyland Studios, describes the setting as “ultra-modern Africa meets a state-of-the-art studio”, combining the latest innovations to support the region’s film industry.

“Kebulania is perfectly positioned to embody the heart of African storytelling,” he adds. “Our goal is to help global citizens feel inspired and fulfilled as they discover the heart of the story of Lagos’ creative ecosystem.”

The Nigerian film industry, often referred to as “Nollywood”, is the second largest film industry in the world after Bollywood in India.

“Nigeria is one of the fastest growing film regions in the world,” says Matt Ferguson, chief innovation officer at Storyland Studios. “They’ve built an organic film industry fueled by really resourceful, creative, enterprising people. They make films with all the equipment, actors and training they can find.

“Kebulania will open countless opportunities to train creatives on how to truly earn a living in the film industry and help create a more formalized industry in Nigeria.”

The film industry sees an annual gross revenue of more than $1 billion and produces around 2,500 films each year. The study town project will attract both a Western clientele and 5,000 to 10,000 daily visitors, generating significant revenue and economic activity for Lagos, both in terms of tourism and the local economy.

“We hope to improve the local film industry and exponentially increase the production and value of Nollywood in the years to come,” Idahosa said.

Storyland Studios is responsible for the design and overall planning of the 224-acre site, a one-of-a-kind studio town on the African continent. Kebulania will be a fully equipped campus and movie grounds for the entertainment industry, in the style of Universal Studios Hollywood. It will be a place where filmmakers, actors, writers, musicians, marketing professionals and other industry personnel can live and work, bringing their creative ideas to life.

The studio city will house fully equipped sound stages and will also host workshops, a film and creative arts academy and a museum commemorating the history of Nollywood. In addition, there will be residential housing, retail, restaurants, entertainment, a hotel, commercial real estate and a theme park set back. A variety of African aesthetics will be used, from historic to present day.

Meanwhile, there will also be a Lost Africa district, with an adventure park, thrill rides and an interactive children’s studio to keep visitors entertained.

The Kebulania Residential Complex will house a work and play community where everyone from film crew members to studio executives can live. The radial design includes a living roof and a central courtyard. At the center of the complex, Storyland introduced a sculptural tower, nicknamed “the Tree of Life”. Residents will be able to access transportation, retail and restaurants. Adjacent to the community will be a complex of studio offices and sound stages.

By bringing together real backlots, accessible by tram, and amusement park-like rides, visitors will have the chance to see real film locations regularly used.

The project also includes a central resort hotel, with a retail, dining and entertainment district that will sit on a lagoon that opens to the Atlantic Ocean. The waterfront setting will have berths for boats and yachts to dock, as well as a waterfall arch that will turn into the centerpiece of a spectacular nighttime spectacle at the end of the day.

“We foresee Kebulania becoming one of Africa’s most popular tourist destinations,” says Ferguson. “We look forward to embarking on the next phase of the process.”

Earlier this year, Storyland Studios announced the appointment of Jonathan Bonner as executive producer for his UK team.

The University of Exeter is worth £1.6bn in the UK